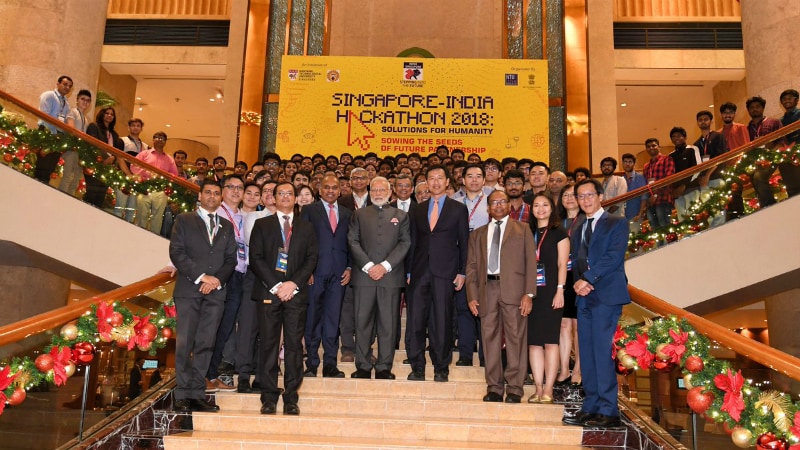 Prime Minister Narendra Modi on Thursday felicitated the six winning teams, including three from India, of the first India-Singapore Hackathon, a platform for the youth of the two countries to harness and showcase their innovations.

The top six teams, three each from India and Singapore, participated in a 36-hour long Hackathon Grande Finale here.

“PM Narendra Modi met and felicitated the winning teams of India Singapore Hackathon, agreed to during the visit of PM to Singapore in June 2018,” Ministry of External Affairs spokesman Raveesh Kumar tweeted.

“Happy to have met innovators who won prizes in the first ever Singapore-India Hackathon. They talked about their extensive work. I was impressed by their passion and commitment towards solving problems our world faces,” Modi said.

Prime Minister Modi presented the awards to the winning teams at an awards ceremony which was also attended by Education Minister of Singapore Ong Ye Kung.

The winning teams from India were IIT Kharagpur, NIT, Trichy and MIT College of Engineering, Pune, the Indian High Commission in Singapore said.

The winning teams from Singapore comprised Nanyang Technological University (NTU) and the Singapore University of Technology and Design (SUTD), it said in a statement.

“Platforms like the Singapore-India Hackathon serve as excellent opportunities for our youngsters to showcase their work. They also serve as forums to learn about pioneering innovations by youngsters from other nations and institutes. A win-win for our students!” Modi said in a tweet.

During his official visit to Singapore in June, Modi proposed to his Singaporean counterpart Lee Hsien Loong that India and Singapore should organise a joint Hackathon to harness and showcase the innovation potential of their youth. The proposal was welcomed by Prime Minister Lee.

The Nanyang Technological University (NTU) in Singapore and the All India Council for Technical Education (AICTE) conducted the hackathon that included solving eight problem statements.

Twenty teams, each from both the countries comprising university and college students selected on nationwide basis, participated in the event to harness and showcase the innovation potential of the youth. Each of these teams had three students and one mentor.

From India, an 83-member delegation comprising 60 students, 20 mentors and three officials of the AICTE visited Singapore for the event which Modi said is a “boost to technology, innovation and youth power”.

Prime Minister Modi also met the National Cadet Corps (NCC) cadets Thursday who were in Singapore as a part of a cadet exchange programme.

“Spent time with NCC cadets, who got the opportunity to come to Singapore as a part of a cadet exchange programme. They shared their memorable learnings and experiences with me,” he said.

Prime Minister Modi is in Singapore for the two-day visit to the country. He began his visit on Wednesday by delivering his keynote address at the prestigious Fintech Festival.

He also held separate bilateral meetings with the premiers of Singapore, Australia, and Thailand and discussed ways to further strengthen ties, including in areas of trade, defence and security.