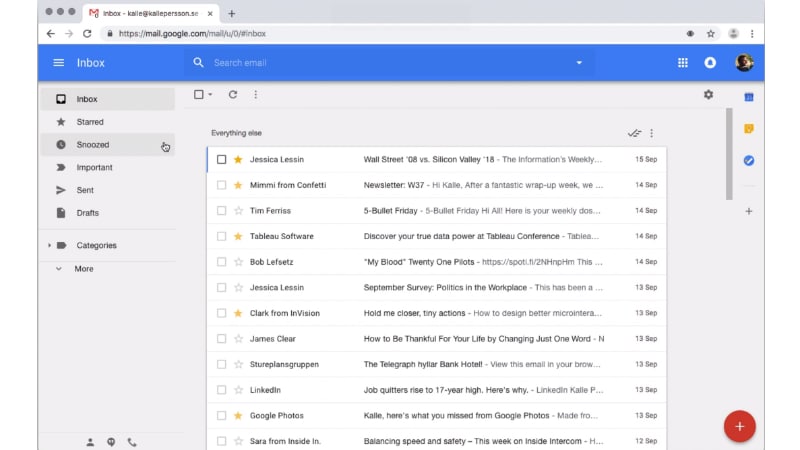 New extension is available for download through Chrome Web Store

It doesn’t bring all the features of Inbox by Gmail

Inbox by Gmail, Google’s email service that was released back in 2014, is all set to say goodbye to the world today. But ahead of its formal departure, a Chrome extension has emerged that transforms Gmail to give it the look and feel of Inbox. The new extension, called Inbox Theme for Gmail, is available for download through the Chrome Web Store. It has been built by a team of developers in Sweden with all great UI elements of Inbox by Gmail. The extension has no affiliation with the official Inbox for Gmail service.

As per the Chrome Web Store listing, the Inbox Theme for Gmail brings the Google Inbox experience to Gmail. It provides the same clean and organised design on Gmail that was previously exclusive to Inbox by Gmail. You can see the mix-and-match of grey and white colours on your inbox after installing the new extension.

Also, the Chrome extension transforms the top bar with colour schemes based on the mailbox components active on the screen. So, for instance, if you have your Inbox on the screen, the extension will show the top bar in vivid Arctic Blue colour, while it converts to bright Orange when viewing the Starred messages.

Also seeWhen Google First Announced Gmail, It Was Brushed Off as an April Fools’ Day Joke

But nevertheless, the extension doesn’t help bring all the renowned features of Inbox by Gmail to Gmail. It just changes the interface to give a look and feel of the email service that is going offline on April 2. This means you won’t get features such as save links and reminders.

As we mentioned, the Inbox Theme for Gmail is available currently available through Chrome Web Store. Its developers, however, have plans to bring its support to more browsers, namely Firefox and Safari. The extension was first spotted by ComputerWorld.