Samsung Galaxy M51 to Go on Sale Today at 12 Noon via Amazon, Samsung.com in India

Samsung Galaxy M51 will go on sale in India today for the first time. The latest smartphone in the company’s Galaxy M series will be available through its first sale via Amazon, Samsung.com, and select retail stores in the country. The USP of the Samsung Galaxy M51 is its large, 7,000mAh battery. However, the phone also comes with quad rear cameras and offers a hole-punch display to offer a comparable experience in its price segment. The Samsung Galaxy M51 is also the first in the series to come with One UI Core, which is a streamlined version of Samsung’s One UI. 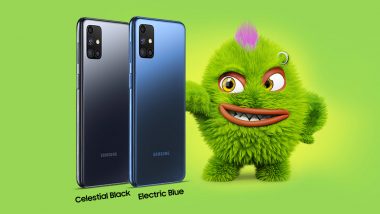 Samsung Galaxy M51 price in India starts at Rs. 24,999 for the 6GB RAM variant. There is also an 8GB RAM option that carries a price tag of Rs. 26,999. The smartphone will be available through Amazon, Samsung.com, and select retail stores in the country in Celestial Black and Electric Blue colour options at 12pm (noon) today.

In terms of a sale offers, Samsung is offering a Rs. 2,000 discount on the purchase of the Galaxy M51 for customers using an HDFC Bank credit or debit card via Amazon. The online marketplace is also offering no-cost EMI options for six months as well as up to Rs. 18,000 off in lieu of an old smartphone.

The dual-SIM (Nano) Samsung Galaxy M51 runs on Android 10-based One UI Core 2.1 and houses a 6.7-inch full-HD+ Super AMOLED Infinity-O Display, along with a 20:9 aspect ratio. It is powered by an octa-core Qualcomm Snapdragon 730G SoC, paired with up to 8GB of RAM. For photos and videos, the smartphone comes with the quad rear camera setup that includes a 64-megapixel primary Sony IMX682 sensor with an f/1.8 lens, along with a 12-megapixel ultra-wide-angle shooter, 5-megapixel macro shooter, and a 5-megapixel depth sensor. You’ll also get a 32-megapixel selfie camera sensor at the front, with an f/2.2 lens.

Samsung has provided 128GB of onboard storage that is expandable using microSD card (up to 512GB) through a dedicated slot. The phone has usual connectivity options that include 4G LTE, Wi-Fi, Bluetooth v5.0, and a USB Type-C port. It also comes with a 3.5mm headphone jack. Further, there is a fingerprint sensor at the side of the phone.

The Samsung Galaxy M51 packs the 7,000mAh battery that supports 25W fast charging. There is also reverse charging support — a USB Type-C-to-Type-C cable is bundled with the phone. Besides, the handset weighs 213 grams.